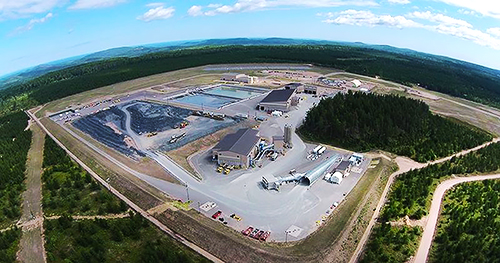 Neponset, Il – The global leader in industrial bulk handling helped a U.S. ore mine experiencing clogging and downtime improve material flow with powerful and compact air cannon technology. Martin Engineering installed the cannons in a chute carrying damp fines through the refining process at Lundin Mining’s Eagle Mine in Michigan’s Upper Peninsula.  The air cannons mitigated blockages and facilitated the movement of material.  The result was improved safety,reduced labor, greater production, less downtime and a calculated ~1000 percent savings to the cost of operation over existing solutions.

“Safety is a top priority for us,” said Ted Lakomowski, Lead Reliability Technician at Eagle Mine.  “When we experienced clogging and downtime at the processing mill, our crew naturally swung into action to resolve it, but we immediately sought a safer long-term solution.”

Eagle Mine is the only primary nickel mine in the United States, producing 1.5% of the world’s total nickel production.  The company extracts approximately 2,200 st/pd (2,000 mt/pd) from the underground nickel-copper mine using a bench-and-fill stoping process.  Ore from the mine is stored in a covered coarse stockpile facility prior to transport to the Humboldt Mill.  A former iron ore processing plant, the Humboldt facility’s three-stage crushing circuit reduces the material to 3/8 inch-minus, then a single stage ball mill grinds it further to sand, where it is mixed into a slurry.

To liberate the nickel and other minerals from the waste materials, a refining process of selective flotation is used.  During the crushing process, a mesh screen separates the fines from the remaining aggregate, which are fed back through the process.  Fines that pass through a screen fall into a wide-mouthed hopper, leading to a chute that narrows to approximately 8 ft (2.5 m) wide by 2 ft (0.6 m) high and — after a dead drop of several feet — slopes abruptly in a ~45º angle of decline.  This slope slowed the descent of the fine material for a low impact and centered discharge onto a conveyor belt leading to the ore bins.  Material buildup began at the hopper and at the discharge slope, but could also occur at virtually any point, blocking the chute.

Accumulation would stop the entire crushing process approximately 3-4 times per shift for as long as an hour, blocking input of material all the way back to the ore storage area.  Workers attacked the clog with 15 foot (4.5 m) long air lances from the top of the hopper and bottom of the chute.  The method used a tremendous amount of compressed air and diverted manpower from other essential duties.  Moreover, air lances caused excessive splash-back of wet material, which was extremely messy and potentially hazardous.

Eagle first installed a polymer lining in the chute.  Offering a low coefficient of friction, the lining was bolted to the chute wall and acted like a smooth slide for the material to ride down.  Less effective against the adherent qualities of the material than hoped, Eagle next installed pneumatic vibrators onto the vessel wall, intended to agitate the adhered material and promote its descent down the chute slope.  But the fact that the polymer lining was bolted to the vessel caused it to dampen the vibration of the units, limiting the force to only the impact zone and not much farther.

“We were forced to default back to air lances, but kept on looking for a better solution,” Lakomowski explained.  “Having worked with Martin Engineering in the past, we asked them to come in, examine the issue and offer a safe, effective and affordable solution.”

Lakomowski advocated for the initial installation of five 35 Liter (9.25 gallon) Martin® Hurricane Air Cannons, followed by two more placed in essential spots in the chute.  One unit was placed at the area where material discharged into the hopper, two others were positioned at the hopper slope where the most accumulation was observed and two more were placed along the drop chute.  All of the tanks were accompanied by a 4-inch (101 mm) pipe assembly ending in fan jet nozzles.

Offering more force output than designs double their size with considerably less air consumption, the compact air cannon tanks measure only 16 in. (406 mm) in diameter 24.92 in.(633 mm) long, weighing 78 lbs (35 kg) each.  The units fire a shot of air at up to 120 PSI (8.27 BAR) through the pipe assembly to a fan jet nozzle.  The nozzle spreads the air stream 12 inches (304 mm) at the exit point, distributing the blast pattern across the surface of the wall.

Operating on a regular firing schedule of every 1-10 minutes — readjusted for production volume, time of year and moisture level — revealed the seven-cannon configuration reduced clogging issues and downtime.  This significantly lowered the risk to operators and reduced the cost of operation.

“When I did the cost assessment, I was surprised to discover that there was a 1000 percent compressed air savings in using the air cannons over the air lances,” Lakomowski said.  “It’s a significantly lower effect on our system than initially predicted, and managers are very happy about that.”

The project also improved safety, as workers spent less time diverted from other assignments to use air lances or create vibration by beating on the vessel walls.  By being able to perform maintenance on wear parts like valves from the outside of the cannon without tank removal, upkeep can be safely performed by a single technician with no heavy lifting involved.

“Just from a safety aspect, this solution has paid for itself,” Lakomowski concluded.  “The Martin Engineering team was easy to work with, and they were cognizant of our budget restrictions.  Overall, this was a successful project.”

Martin Engineering has been a global innovator in the bulk material handling industry for more than 75 years, developing new solutions to common problems and participating in industry organizations to improve safety and productivity.  The company’s series of Foundations books is an internationally-recognized resource for safety, maintenance and operations training — with more than 22,000 print copies in circulation around the world.  The 500+ page reference books are available in several languages and have been downloaded thousands of times as free PDFs from the Martin web site.  Martin Engineering products, sales, service and training are available from 19 factory-owned facilities worldwide, with wholly-owned business units in Australia, Brazil, Chile, China, Colombia, France, Germany, India, Indonesia, Italy, Japan, Mexico, Peru, Spain, South Africa, Turkey, the USA and UK.  The firm employs more than 1,000 people, approximately 400 of whom hold advanced degrees.  For more information, contact info@martin-eng.com, visit www.martin-eng.com, or call (800) 544-2947.

Martin Engineering was founded in 1944 by Edwin F. Peterson, a foundry pattern maker in a small Illinois town. The initial idea for the company’s inception came as he watched co-workers struggle to overcome sand blockages on the foundry’s mold-making machines by pounding on the hoppers with hammers. He was troubled by the safety risks, equipment damage and loss of productivity that resulted. Those concerns prompted him to design the Vibrolator® Industrial Vibrator, which uses the rotation of a single steel ball in a hardened steel raceway, propelled by compressed air. Patented in 1949, it was the first of the innovative products introduced by Martin Engineering to solve problems in bulk materials handling, and remains today as one of the world’s most accepted vibrators to facilitate the movement of bulk solids. From its beginning, the firm has been a family-owned, privately-held company.

Martin Engineering, a Global Company for the Aggregate and Mining Industry